I've enjoyed a fabulous career creating wigs, and dressing hair for theatre and TV. And I've been lucky enough to work with some of the biggest names in the industry (I've even made tea for Rudolph Nureyev!)

I trained in hairdressing and wig making nearly 40 years ago. I moved into the world of theatre and television, where I became involved in handmade wig making. I also trained in makeup application and techniques.

My most recent work has been with Glyndebourne Festival Opera, and during my career I've also worked with the Royal Opera House, Covent Garden; Kent Opera; New Sadlers' Wells Opera; Scottish Opera, and Wexford Opera in Southern Ireland.

While making wigs for the West Yorkshire Playhouse in Leeds I organised the hair, wigs and makeup at the historical pageant for the opening of the Royal Armouries Building, attended by her Majesty Queen Elizabeth ll.

I've worked on TV production too for companies such as Yorkshire Television and Granada Television. And I had great fun making miniature wigs for the Spitting Image TV show.

It was my love of history that led to this career - and to In Vogue and Vintage. So I'm in my element working for model making companies that stage exhibitions and historically themed displays for museums and heritage centres across the globe. I've had work displayed as far away as Singapore, and also in this country at the world famous Jorvik Centre in York.

And when I'm not making or styling wigs?

I love hunting out vintage bargains. Whether it's a piece of 30s pottery or a stunning 50s hat, it's always exciting to find a little gem.

Gardening is another passion and it's great to share all the colours and scents on a summer's evening with friends. 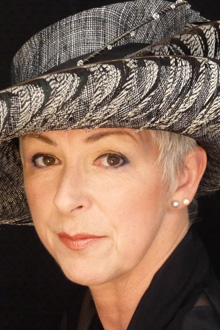 I use only natural based hair and makeup products to create fabulous, sophisticated styles. I've chosen products that contain no harmful ingredients or harsh chemicals, and it goes without saying they're not tested on animals.